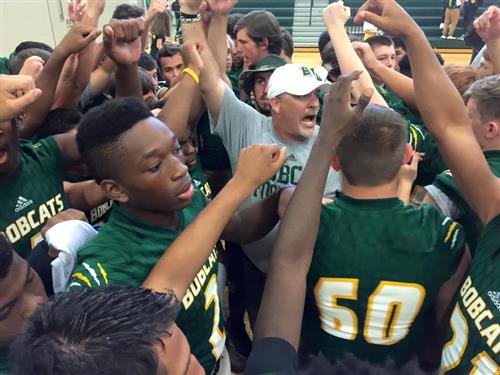 In Texas, there’s no doubt we love our high school football, but the program built by Benbrook High School goes beyond Friday night entertainment—it’s a team built on discipline, perseverance and tradition. The Bobcats are currently 5-1 for the year, defeating tough rivals and working toward the 4A Division I playoffs.

Ventana in Fort Worth is showcasing the Benbrook High School football program on our blog today—read on to learn more!

The Benbrook High School football program is led by Coach Cody Slater, who took the position as athletic coordinator and head football coach in 2014. His mission is to build a winning tradition for Benbrook athletics, both on and off the field.

The Bobcats are currently 5-1, recently winning sure-handedly against Western Hills on Sept. 28 and securing a 63-21 victory over Lake Worth on Oct. 5.

“Our team has the heart of a champion, and that will be revealed,” Coach Slater wrote on Facebook. “In our program we have a saying ‘Tough Times Don’t Last, Tough People Do!!’ I believe this type of adversity builds character and reveals it.”

The Benbrook football program relies on the support of the community! In addition to attending games to cheer on the Bobcats, parents can learn how to support the kids through the Benbrook Athletic Booster Club, which sells T-shirts, gear and coupon books to support the team.

The Benbrook High School football team takes the field again for Homecoming on Oct. 12 against Dunbar at Clark Stadium beginning at 7:30 p.m.

Ventana wishes our Bobcats a great rest of the season! Located in southwest Fort Worth, we’re proud our students attend the commended Benbrook Middle-High School. To learn more about the schools in our community, read our Q&A with Westpark Elementary School Principal Susan Hill and explore our website to learn about our Fort Worth master-planned community.